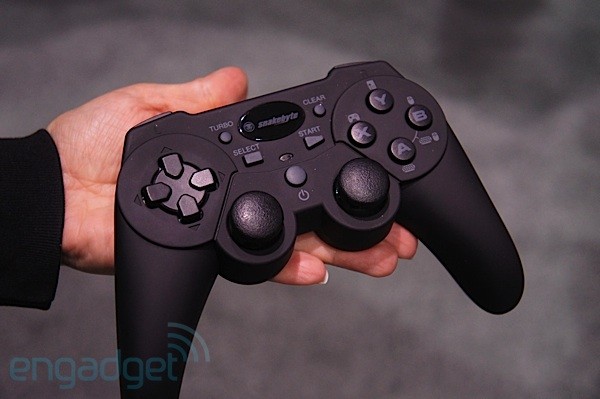 If you’re a mobile / tablet gaming enthusiast, you may get tired of swiping your fingers across the Retina display or using the on-screen controls. Snakebyte is looking to lend a hand with its upcoming game controller for Android slates and the iPad, so we went hands-on here at E3. The accessory plays nice with tablet PCs running Gingerbread or Ice Cream Sandwich and Apple’s portable device outfitted with any iCade-compatible apps. Dressed in a soft-touch coating, the peripheral feels great in the hand and the base is much like a PS3 controller. The unit connects via Bluetooth and pairing it with your mobile gaming device of choice is a breeze. When performing said set-up, you can select from five different modes to suit your needs including gamepad / controller, keyboard and mouse, solo keyboard, solo mouse and iCade mode (iOS-only). You’ll always know which setting you’ve chosen thanks to an LED indicator on the front side of the kit. Touting eight hours of battery life, the gaming accessory charges via USB and will include a simple stand for your slate. Interested? You’ll be able to snag one for $40 at the end of July. For now, though, take a peek at the gallery below for a closer look.

Snakebyte tablet gaming controller for Android and iOS hands-on originally appeared on Engadget on Thu, 07 Jun 2012 13:00:00 EDT. Please see our terms for use of feeds.