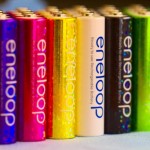 Pete Slater With battery technology being critical for so many things, interest in building better batteries just keeps on growing. The recent Tesla Model S testing debacle, explosive laptop batteries , and Boeing battery problems give us hints at how close to the edge engineers operate batteries. Volume, weight, and energy are key. Minimize the first two and maximize the last to obtain energy storage nirvana. Lithium-ion batteries rule the roost at the moment, but as capacities are already on the order of 200Wh/kg, we’re pushing up against their limits—basic chemical reactions provide a fixed amount of energy. The search for alternatives is being pursued by a rapidly growing field of eyebrow-less engineers (just kidding; battery mishaps don’t happen that often ). A recent publication on a sodium-air battery shows promise, but it also demonstrates what a huge amount of work still needs to be done. The key to a battery is a simple chemical reaction that, at its heart, is the exchange of an electron. During the exchange, a certain amount of energy is released, usually in the form of heat. That’s why, when you drop some sodium metal in water, the energy released is enough to cause explosions. The role of the battery is to intercept that electron and release its energy in the form of useful work. Read 8 remaining paragraphs | Comments