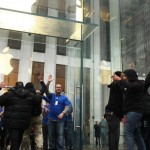 The Reality of the iPhone Line Is a Black Market Nightmare