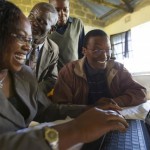 Microsoft White space networks haven’t exactly revolutionized Internet access in the US, but that doesn’t mean the technology can’t have a major impact in countries that lack consistent access to the Internet. The latest project showing the power of white spaces is unfolding in Kenya, where a solar-powered network is bringing the Internet to people who aren’t even connected to an electric grid. Microsoft deployed the network last month in conjunction with Kenyan government officials. It is serving a health care clinic in Burguret, a primary and secondary school in Male (that’s pronounced “mah-lay”), a secondary school in Gakawa, and a library in Laikipia. The network will be expanded to 20 locations in the coming months. “Down in the valley, nobody has electricity,” Paul Garnett, director of technology policy at Microsoft, told Ars. Garnett has been shuttling back and forth between the US and Kenya to get the white spaces network up and running, and he gave me an update on the project in a recent phone interview. Read 17 remaining paragraphs | Comments

Anatomy of a password-crack, part II