The Earth and the moon share more than an orbit around the Sun. Turns out that bits of atmosphere manage to travel the 240, 000 miles out to our nearest celestial neighbor, and have been for more than 2 billion years, according to data gathered by Japan’s moon-orbiting Kaguya spacecraft. In a study published on Monday to the journal Nature Astronomy , planetary scientist Kentaro Terada of Osaka University observes that ionized oxygen particles escape from the upper atmosphere for five days every month to bombard the surface of the moon. Terada’s data suggests that oxygen atoms in the upper atmosphere are first ionized by ultraviolet light and then accelerated into the magnetosphere , the planet’s magnetic envelope. The magnetosphere extends more than 370, 000 miles away from the Sun, fully enveloping the moon’s own orbit around the Earth. For five days every month when the moon passes through the magnetosphere, it is blasted with these ionized particles. The Osaka University team estimates that every square centimeter of the moon’s exposed surface is struck by approximately 26, 000 oxygen ions every second over the five day period. While this isn’t enough for the moon to develop a breathable atmosphere of its own, this discovery suggests that the moon’s surface could hold clues to Earth’s ancient atmosphere — much like ice cores being dug out of the Greenland and Antarctic permafrost. Source: Science News

Visit link:
Some of Earth’s oxygen escapes to the moon every month 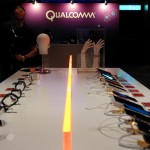 Next for Qualcomm: faster Wi-Fi and a gateway to cheap tablets