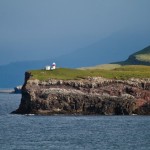 The rugged coast of the Faroe islands don’t lend themselves to easy colonization. Flickr user Stig Nygaard The Faroe Islands, a remote archipelago between Scotland and Iceland, could have been inhabited 500 years earlier than was previously thought, according to a startling archaeological discovery. The islands were thought to have been colonized by the Vikings in the 9th century AD. However, dating of peat ash and barley grains has revealed that humans had actually settled there somewhere between the 4th and 6th centuries AD. The Faroes were the first stepping stone beyond the Shetland Islands for the dispersal of European people across the North Atlantic. The findings therefore allow speculation as to whether Iceland, Greenland, and even North America were reached earlier than previously thought. The Faroes are in the North Atlantic, roughly equidistant between Iceland, Norway, and the UK. Mike Church from the University of Durham said he and his research partner, Símun V. Arge from the National Museum of the Faroe Islands, had not expected to find such evidence. “Símun and myself sampled the site in 2006 to take scientific samples for environmental archaeological analysis from the medieval Viking settlement, “ he said. Read 12 remaining paragraphs | Comments

Visit site:
Someone beat the Vikings into the North Atlantic by 500 years