Sony has named a new flagship in its Android-powered Xperia smartphone line up which focuses on beefing up camera capabilities.  The 4G Xperia Z1, roundly leaked under the moniker ‘Honami’ but officially confirmed today at Sony’s IFA press conference in Berlin, is a follow up to the 5-inch, quad-core Xperia Z  unboxed at the start of the year at CES. The Xperia Z1 has a 20.7MP camera on its rump (vs the 13.1MP on the Xperia Z) coupled with a 1/2.3-inch Exmor RS CMOS image sensor, Sony’s G Lens (27mm wide angle, f2.0 aperture) and Bionz image processing engine which Sony users in its standalone cameras. There’s also 3x “clear image zoom” — with Sony claiming its optical zoom delivers “zero distortion”. Sony is making big boasts for this lens combo — claiming it offers “best in class imaging” and is the “ world’s leading camera in a smartphone ” (Nokia may however disagree; its Lumia 1020 smartphone has a 41MP lens ). NB: Sony’s odd wording here — “camera in a smartphone” — can be explained by its simultaneous attempts to extend phone camera smarts via a hardware add-on lens system that clips onto any phone , including the Xperia Z1. Sony is preloading a series of camera apps onto the Z1 to extend its camera capabilities on the software side — including Social Life, a camera streaming app to broadcast what’s going on around you to Facebook; a Timeshift burst mode to take multiple images so you can choose the best shot from several; a visual search app called Info-Eye to get more info on snapped products/landmarks; and an augmented reality app called AR Effect to overlay customised animations onto images. Sony is clearly following in the footsteps of rivals’ strategy here, including Nokia  (with its PureView imaging push) and  Samsung , which has also focused on making its own suite of imaging apps for flagship devices such as the Galaxy S4. But as well as making its own apps, Sony’s hoping to get developers working for it on the camera front too. “It’s built with an open SDK and we’re already working with a talented group of app developers that will extend its capabilities, ” it said today. Elsewhere, the Xperia Z1 looks to be a slightly beefed up version of its earlier sibling, with the same size 5-inch 1080p display — albeit this time including newer Sony screen tech that it has also brought to the Xperia Z Ultra phablet. Sony’s Triluminos screen tech apparently supports a greater range of colours with natural shades. The Z1 also features Sony’s X-Reality technology for improving the viewing experience of low res video. The Xperia Z1 runs Android 4.2 Jelly Bean at launch. Under the hood it has a 2.2Ghz quad-core Qualcomm Snapdragon 800 chipset. There’s also 2GB RAM, 16GB internal storage –expandable via a microSD card slot — and a 3, 000mAh battery. Design wise, the Xperia Z1 shares the look and feel of the rest of Sony’s Xperia range — with clean lines and blunt edges, although Sony says it’s evolved the design, most notably by adding a one piece aluminium casing to all the plastic. Oh and the Z1 is also waterproof, as is its predecessor. To ram that point home, Sony apparently thought it was a good idea to entertain IFA attendees by getting  some ladies to cavort with some phones in some water . As sexist displays go, it’s pretty impressive — even by tech industry ‘booth babe’ standards — so well done Sony for alienating ~50% of potential buyers. It better hope the other 50% gets so distracted they end up buying two phones apiece. On the size front, neither the Xperia Z1 or its numeral-less sibling is the largest handset Sony makes, although their five inch displays sits on the cusp of phablet territory. The Sony enormo-phone award goes to its palm-stretching  Xperia Z Ultra : a 6.4 inch phablet that’s so large Sony sells a Bluetooth handset accessory for it so you can comfortably take calls. Sony said the Xperia Z1 is due to hit shelves “starting this month”. 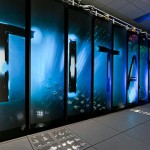 The World’s Fastest Computer Is Being Slowed Down By Too Much...