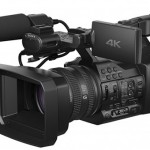 Other than a smallish 1/2.3-inch sensor, Sony’s new PXW-Z100 4K camcorder should push all the right buttons for pro shooters. Though it shares a sensor (and body) with the newly launched FDR-AX1 prosumer model, everything is upmarket from there. It’ll record 4:2:2 10-bit (billions of colors) 4K video at up to 500/600Mbps at 50p/60p using its new XAVC format and high-speed XQD memory cards . By contrast, the FDR-AX1 uses XAVC-S, capturing 60fps 4K at 150Mbps in 4:2:0 8-bit color. HD is also recorded at 10-bit at a healthy 233Mbps for 50 or 60 fps video, compared to 50Mbps for its prosumer cousin. You’ll be able to output 4K video at up to 60fps via HDMI to a compatible BRAVIA monitor, and a remote control WiFi adaptor is included. All that’s missing is the shallow depth of field you’d get with a larger sensor — but a lot of shooters are so over that. Filed under: Cameras , HD , Sony Comments Via: NoFilmSchool Source: Sony 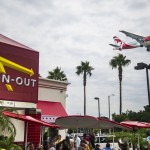