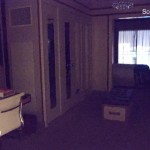 This week, Sony announced the A7s , a full-frame mirrorless camera that captures 4K video. But the 12-megapixel shooter has a few more tricks up its sleeve, including a phenomenally high top sensitivity of ISO 409, 600, matching the Hi4 setting of Nikon’s much larger (and pricier) D4S . Sony commissioned DP Den Lennie to shoot a demo reel that highlights the camera’s 4K capabilities, but he had another chance to test out the cam at NAB . This time, Lennie put high-ISO video capture to the test, comparing ISO 6400 through 409, 600 in a single clip. The difference is staggering, and while that top sensitivity brings more noise than you’d tolerate for a formal production, it could definitely come in handy for surveillance activities. See for yourself in Lennie’s high-sensitivity demo video, embedded at the bottom of his post . Filed under: Cameras , Sony Comments Via: sonyalpharumors Source: Den Lennie