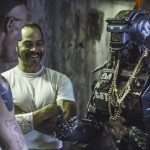 If you were hoping Ultra HD Blu-ray discs would be here in time for the holidays, you’re going to have to wait a bit longer. Well, as far as Sony Pictures content is concerned anyway. The company announced today that its 4K Ultra HD discs will go on sale “in early 2016, ” missing the end-of-the-year estimate the Blu-ray Disc Association revealed back in August. When Sony’s catalog does arrive, you can expect The Amazing Spider-Man 2, Salt, Hancock, Chappie, Pineapple Express, and The Smurfs 2 to be included in the first wave of releases. Newer movies like Fury and Captain Philips are in the works as well, and after being restored from the original film, the likes of Ghostbusters and The Fifth Element will make the leap to 4K , too.

Microsoft Has Received 1 Million Pieces of Feedback For Windows 10