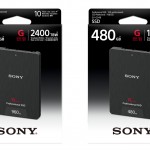 Aspiring 4K filmmakers who want the best quality can buy pro-level RAW video cameras on the cheap, or use a DSLR with an external 4K recorder like the Atomos Ninja 2 . However, the SSDs on such devices often record and dump out high bit-rate 4K video multiple times a week, so they need to be much faster and more durable than the one on your laptop. That’s where Sony comes in with its latest G Series Professional SSDs, which can write up to 2, 400 terabytes without failing and use tech that prevents disastrous frame dropping. Sony says the SV-GS96 960GB model’s 2, 400 terabyte rating will let you fully write the drive five days a week for ten years without failing, while the 480GB model (SV-GS48) gives you about half that durability. Both drives can read at up to 550 MB/s and write at 500 MB/s, but Sony adds that the drives “feature built-in technology preventing sudden speed decreases, while ensuring stable recording of high bit-rate 4K video without frame dropping.” The drives also have built-in data protection tech that protects them from power failures and connectors that can handle 3, 000 removal and insertions, “six times more tolerance than standard SATA connectors, ” it says. Performance and ruggedness comes at a price. The 960GB unit costs $539, compared to around $350 for a Kingston HyperX Savage 960GB drive, a model that’s rated to capture 4K RAW video with Blackmagic’s BMCC camera . The 480GB SSD is a bit more reasonable at $287 compared to around $190 for the equivalent Kingston model. Considering the thousands that an SSD failure could cost , filmmaker will likely see the difference as chump change. Sony says they’ll arrive in May 2017. Source: Sony

Intel’s New Broadwell Processor Could Make Your Next Ultrabook Silent