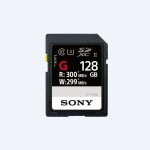 Sony’s upcoming SF-G series of SD cards will be available this spring, the company announced today . When that time comes, Sony said they “will be the world’s fastest SD cards.” Boasting a maximum write speed of 299 MB/s, that claim is right on point. The cards (available in 32GB, 64GB, and 128GB sizes) also have a slightly higher top read speed of 300 MB/s. Speed is a priority, so the cards also support the UHS-II interface, which adds a second row of connecting pins to the card for increased transfer rates on compatible hardware. More than any card before it, the SF-G series will be able to handle quick-shooting cameras smoothly, as well as capturing 4K video and other technically demanding uses. To fully take advantage of the tremendous speed, Sony also revealed it will offer a specialized card reader so users can quickly transfer files to and from their computers. The SF-G series will take good care of your files, too. In addition to being compatible with Sony’s file rescue software , these SD’s are also waterproof, temperature resistant, shockproof and X-Ray proof. For comparison, B&H Photo Video says that two of the fastest SD card lines out there today, SanDisk’s Extreme PRO UHS-II series and Lexar’s Professional 2000x UHS-II series, can achieve read speeds of 300 MB/s and write speeds of 260 MB/s. For the more casual user, Amazon’s best-selling card, the 32GB SanDisk Ultra Class 10 SDHC UHS-I , tops out at 80 MB/s for read and write speeds. Sony has yet to announce the pricing for these cards, but the 32GB version of the aforementioned SanDisk card sells for about $60 . The SF-G cards are technically superior, though, so expect them to retail for a bit more than that. Source: Sony

How did Yahoo get breached? Employee got spear phished, FBI suggests