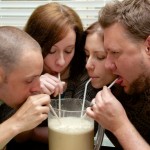 EVERYBODY SOYLENT. Lee Hutchinson TechCrunch is reporting that Rob Rhinehart’s Soylent, the nutritionally complete meal replacement shake/drink mix, has just closed out a $1.5 million seed funding round from a wide mix of investors led by Andreessen Horowitz and Lerer Ventures. This is on top of the $1.5 million in pre-orders the company already amassed as part of its crazy-successful crowdfunding run earlier this year. The project has been a poster child for crowdfunding success—in fact, the sheer volume of orders has caused its own set of delays in scaling Soylent from a hand-mixed product for a few dozen testers to a mass-produced meal replacement for hundreds of thousands of customers. Rhinehart and company have discussed the ongoing growing pains on the official Soylent blog . The round of funding should give the Soylent crew some breathing room. TechCrunch reports that the company has finalized the 1.0 formulation of the product and will be moving some amount of manufacturing in-house. The company is also moving offices from San Francisco to Los Angeles, and Soylent will bring in a “culinary director” to help evolve the product’s flavor and (currently extremely chalky) mouthfeel. Read 2 remaining paragraphs | Comments

Visit link:
Soylent gets a $1.5 million infusion of venture capital