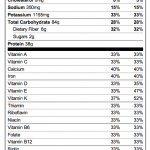 Soylent It’s official: all-in-one meal supplement (or replacement) Soylent has a nutrition label . In a blog post two weeks ago, Soylent founder Rob Rhinehart noted that the company had decided to produce a single 2,000-kilocalorie version for their initial production run; beta versions (including the 0.89 Beta formula we tried) came in male and female variants. The single launch formula means that a single nutritional label can be applied to all the packages of Soylent going out the door. In its shipping form, a three-serving bag of Soylent clocks in at 2,010kcal, with 630kcal from fat—that’s with the combined package of canola and fish oil added into the mix. All together, a full day’s worth of Soylent 1.0 will give you 1,050mg of sodium, 3,465mg of potassium, 252 total grams of carbs (including 24g dietary fiber and 6g of sugars), and 114g of protein. There’s no cholesterol in the dry ingredients; the oil mix adds about 15 percent of your daily recommended cholesterol intake (specific numbers on the oil aren’t included as part of the label). Read 8 remaining paragraphs | Comments 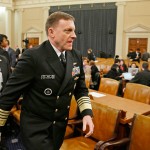 Bruce Schneier On Cisco ROMMON Firmware Exploit: "This Is Serious"