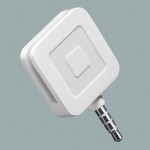 As Square spreads its wings to Japan , starts a new cash-by-email service and retools its mobile apps , the humble credit card reader that started it all hasn’t received much attention of late. That changes today, however, with the unveiling of the brand new Square Reader. It’s 45 percent thinner than the previous iteration, which Square says makes it the “thinnest mobile card reader on the market.” In order to keep the design slim while boosting its performance, Square had to custom-design several of the reader’s key components. They include the magnetic readhead and spring that were specially designed for more accurate card-swiping. It also has custom electronics in a single chip so that it simply relies on the plugged-in device for power, negating the need for a separate battery. Last but not least, the audio plug has been redesigned with better communications protocols so that it’ll play nice with a wider array of products. The new Square Reader will be in around 30, 000 retail stores nationwide starting next year, but if you want it now for your burgeoning small business, you can get it for free from the company’s website. To see just how skinny the new reader is, you can check out the side view after the break. Filed under: Misc Comments Source: Square