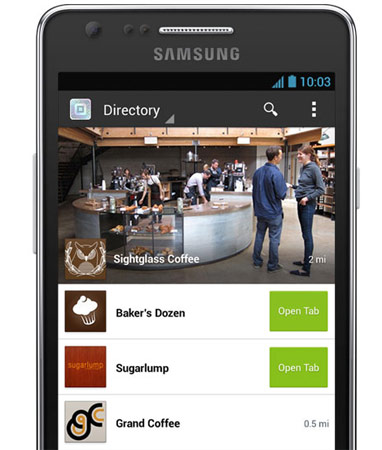 You might know Square for accepting payments on your smartphone via a cute dongle, but you’re probably less familiar with its second offshoot, Card Case — a separate app that has enabled hands-free and NFC-free payments at over 70,000+ merchants for more than a year now. That effort is getting a complete overhaul today, cumulating in an entire rethink of the app and experience, in addition to its more-apt new title: Pay with Square. The redesigned UI loses its former card and leather-based garnish, opting instead for a simplified list of merchants sorted by distance and relevancy. Also making its debut is a search box, a spiffy map view and the ability to share merchants to friends through text, email or Twitter. We’re most excited, though, for feature parity across iPhone and Android, which means formerly iOS-exclusive features like the auto-creation of tabs at pre-approved venues (thanks to iOS 5’s geo-fencing APIs) are now present to green little robots everywhere. That’s no small feat, as the company’s had to roll their own geo-location API to pick up where Google’s left off. We’re still waiting for the Google Play listing to update, but we’ll have a fresh link for you when it does.

Square’s Card Case rechristened ‘Pay with Square,’ is first to bring geo-fenced hands-free payments to Android originally appeared on Engadget on Sun, 25 Mar 2012 21:33:00 EDT. Please see our terms for use of feeds.