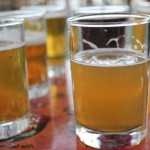 Homebrewing is a niche hobby today, but before the industrialization of the industry, a lot of beer was made in people’s kitchens. Li Liu, a professor in Chinese archaeology at Stanford, was part of a team that recently discovered a 5, 000-year-old beer recipe that she figured could be recreated at home. The process was approachable enough for students in her Archaeology of Food: Production, Consumption and Ritual course to make in the classroom, so that’s what they did. The recipe, found during research that presents the earliest known evidence of beer production in China, consists primarily of grains like millet and barley, as well as Job’s tears (a type of grass native to southeast Asia) and traces of yam and lily root. The concoction produced is thicker than modern beers, and one student said it had “a pleasant fruity smell and a citrus taste, similar to a cider.” Liu said she was surprised to find that barley was part of the recipe, since the earliest evidence of barley seeds in China dates back to about 4, 000 years ago. This could mean that barley was first brought to China for alcoholic uses, rather than other food purposes. “Archaeology is not just about reading books and analyzing artifacts, ” Liu said . “Trying to imitate ancient behavior and make things with the ancient method helps students really put themselves into the past and understand why people did what they did.” Ancient drinks have captured the imaginations of many consumers and enthusiasts, which is why breweries like Dogfish Head make their own throwback beverages based on the traditions of yesteryear. For those wanting to learn more about the process, watch Liu explain the process in the video below. Source: Stanford

The Windows 10 control panel modernization continues: Fonts get some love