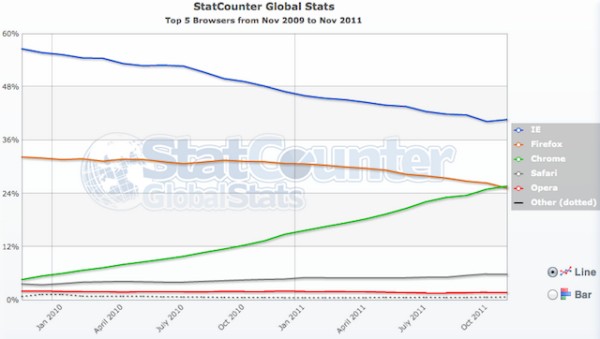 StatCounter has just released its latest global report on web browser usage, and it’s something of a doozy. According to the analytics firm, Google Chrome overtook Mozilla Firefox for the first time this month, becoming the world’s second most widely used browser. During November, Chrome accounted for about 25.7 percent of the global market, up from a measly 4.66 percent in 2009, and slightly higher than the 25.2 percent that Firefox pulled down this month. It still trails Internet Explorer, however, which still enjoys a healthy 40.6 percent market share globally, and a 50.7 percent share in the US. As the above graph clearly demonstrates, however, both IE and Firefox have seen notable declines in recent months, though the latter still has a slim lead over Chrome in the US market, with a 20.9 percent share, compared with Google’s 17.3 percent cut. For more country-specific stats and crunchy numbers, check out the source link, below.