Enlarge Snatching the login credentials of a locked computer just got easier and faster, thanks to a technique that requires only $50 worth of hardware and takes less than 30 seconds to carry out. Rob Fuller, a principal security engineer at R5 Industries, said the hack works reliably on Windows devices and has also succeeded on OS X, although he’s working with others to determine if it’s just his setup that’s vulnerable. The hack works by plugging a flash-sized minicomputer into an unattended computer that’s logged in but currently locked. In about 20 seconds, the USB device will obtain the user name and password hash used to log into the computer. Fuller, who is better known by his hacker handle mubix, said the technique works using both the Hak5 Turtle ($50) and USB Armory ($155) , both of which are USB-mounted computers that run Linux. “First off, this is dead simple and shouldn’t work, but it does,” mubix wrote in a blog post published Tuesday . “Also, there is no possible way that I’m the first one that has identified this, but here it is (trust me, I tested it so many ways to confirm it because I couldn’t believe it was true).” Read 5 remaining paragraphs | Comments 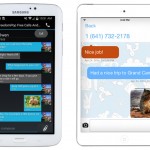 FreedomPop’s free data and voice are now available on tablets