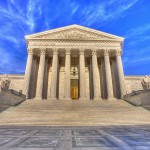 US Supreme Court building. (credit: MitchellShapiroPhotography ) The US Supreme Court is giving Backpage.com a victory over the US Senate, at least in the short term. Chief Justice John Roberts says the online classified ad portal, at least for now, does not have to comply with a Senate subpoena investigating how Backpage conducts its business. The investigation demands documents about the ins and outs of the site’s editorial practices. The Permanent Subcommittee on Investigations contends that the site is littered with ads that amount to offering sex services by women and children forced into prostitution, and it wants to know how it screens ads posted to its site by third parties. The chief justice’s decision Tuesday comes days after a federal appeals court upheld a ruling by a lower court judge and said  (PDF) Backpage must comply with the subpoena. The Senate and Backpage have been deadlocked in a legal battle for more than a year. Backpage said the First Amendment shields it from having to comply with the subpoena , (PDF) while the Senate maintains that the First Amendment implications are secondary  (PDF) to cutting down on sex trafficking ads on the site. Read 4 remaining paragraphs | Comments