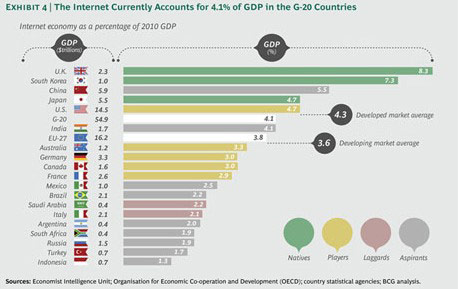 Ever wondered how much the interwebs contribute to the Uncle Sam’s bottom line? Thanks to the Boston Consulting Group, now you don’t have to, as it’s estimated the net contributes a cool $684 billion is to the US gross domestic product. That’s roughly 4.7 percent of US GDP, the same tranche as its effect on Japan’s economy, but less than the 5.5, 7.3 and 8.3 percentages clocked in by China, South Korea and the United Kingdom, respectively. And per the report, the internet is just getting started, with future growth set to hit eight percent on average by 2016 for developed countries, and well north of 20 percent in booming economies like those of Argentina and India. Hit the source for the full report.

Surprise! Study finds internet worth a lot of money, is responsible for 4.7 percent of US economy originally appeared on Engadget on Tue, 20 Mar 2012 19:41:00 EDT. Please see our terms for use of feeds.

Excerpt from:
Surprise! Study finds internet worth a lot of money, is responsible for 4.7 percent of US economy