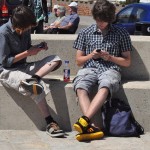 simon_bramwell The developers of Yik Yak , an app that works as an anonymous message board for up to 500 people in close proximity to one another, have selectively disabled the app’s use in Chicago following vicious sniping and rumor mongering by children using it at school. WLS-TV in Chicago reports that people in the city won’t be able to use Yik Yak until the developers figure out a way to get youth usage under control. Apps for sharing information anonymously like Wut and Secret have seen a recent surge in popularity. In the case of Wut and Secret, users are connected to people they actually know—Secret uses the mobile device’s contact list, and Wut’s (anonymous) contacts are powered by Facebook. Yik Yak, by contrast, connects a large swath of people—friends, enemies, and strangers—based entirely on their location. Among middle and high schoolers, this becomes many lockers’- and bathroom walls’-worth of pain and drama. WLS-TV reports students in Chicago have used it to spread rumors about rape, and in other locales, schools have been evacuated because of bomb threats on the service. Read 1 remaining paragraphs | Comments

Original post:
Teens get banned from an app after vicious attacks and threats