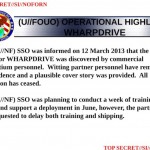 Der Spiegel via Edward Snowden via NSA Sometimes, the spooks do get caught. German magazine Der Spiegel yesterday revealed a new slide  (PDF) from the Edward Snowden document cache that offers a tantalizing glimpse of what it looks like when someone stumbles on an intelligence agency cable tap. The NSA’s Special Source Operations (SSO) branch isn’t in the business of computer hacking but of cable tapping; its logo shows an eagle flying above the globe and clutching a string of wires in its talons. These taps, each obscured with a codename, are often made deep within the network of telecom providers and often with the cooperation of key executives. But sometimes non-cleared people start raising questions about just what might be going on, as was the case with AT&T whistleblower Mark Klein, who revealed an NSA “secret room” in San Francisco . On March 14, 2013, an SSO weekly briefing included a note regarding such a discovery. The unit had been informed two days earlier that “the access point for WHARPDRIVE was discovered by commercial consortium personnel. Witting partner personnel have removed the evidence and a plausible cover story was provided. All collection has ceased.” Read 2 remaining paragraphs | Comments

See the original post:
Tell a lie, remove the gear: How the NSA covers up when cable taps are found 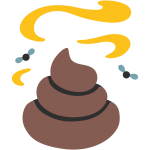 Secret history of the poop emoji