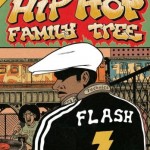 Cartoonist Ed Piskor’s latest book, The Hip Hop Family Tree (Fantagraphic Books) collects his non-fiction comic strip history of Hip Hop, serialized weekly here on Boing Boing. The Hip Hop Family Tree follows the success of his debut graphic novel last year, Wizzywig (Top Shelf Comics), the tale of a computer hacker. Piskor has a special knack for creating comics that appeal to audiences beyond those of us who frequent comic book shops and bookmark webcomics for daily reading. We caught up with him after a busy month of promotional activity for the new book, including stops at Miami Book Fair, Chicago Ideas Week, Brooklyn Book Fair, and the Small Press Expo. GET TMSIDK: RSS | On iTunes | Download episode | Listen on Stitcher Follow TMSIDK on Twitter Tell Me Something I Don’t Know is produced and hosted by three talented cartoonists and illustrators: Jim Rugg , a Pittsburgh-based comic book artist, graphic designer, zinemaker, and writer best known for Afrodisiac , The Plain Janes , and Street Angel . His latest project is SUPERMAG . Jasen Lex is a designer and illustrator from Pittsburgh. He is currently working on a graphic novel called Washington Unbound. All of his art and comics can be found at jasenlex.com . Ed Piskor is the cartoonist who drew the comic, Wizzywig , and draws the Brain Rot/ Hip Hop Family Tree comic strip at this very site, soon to be collected by Fantagraphics Books and available for pre-order now .

Neanderthals were distilling tar 200 thousand years ago in Europe