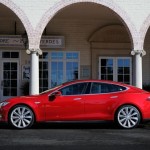 Tesla’s shares are up 3.9 percent to $30.04 on Monday due to Q3 results that point to better things ahead for the Californian EV maker. The company recently reported revenues of $50 million for the third quarter alone, and is well on track to hit its target of $400 to $440 million by year’s end. In a letter to shareholders, Tesla credits production increase for the success, stating that it “successfully transitioned to a mass production car company, growing from manufacturing 5 cars per week at the beginning of the quarter to 100 cars per week by the end.” Indeed, it apparently delivered almost 350 Model S cars in Q3, and expects about 2,500 to 3,000 more of the shiny electric sedans to be sold in Q4, putting the company squarely in the black. We’re not sure if its newly launched Supercharger network has anything to do with the recent uptick in sales, but hopefully this means it’ll be able to pay off that DOE loan soon. Filed under: Transportation Tesla reports great Q3 results, expects to be cash flow positive by Q4 originally appeared on Engadget on Mon, 05 Nov 2012 17:50:00 EDT. Please see our terms for use of feeds . Permalink    |  Forbes  |  Email this  |  Comments

Inside the Blood Factory That Keeps Track of the World’s Rare...