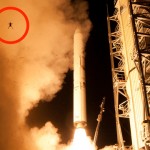 Spot the unlucky frog in this photo of last week’s NASA...