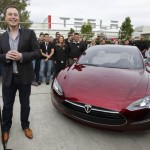 Tesla hasn’t quite delivered its new Model X SUV yet, but at least we have a name for its first electric vehicle pointed at the mainstream. In an interview with AutoExpress , CEO Elon Musk revealed it will be called the Model 3 (with three bars to represent it), after Ford put the kibosh on calling it the Model E. Musk has repeatedly targeted 2017 as the release window for a smaller $35, 000 vehicle . He’s said it will be the third generation after the original Roadster and Model S, and in the interview claims it will have a range of over 200 miles per charge, probably using batteries built in Tesla’s planned Gigafactory . Musk also told the mag about a range boost upgrade coming for the original Roadster that will give it a modern battery capable of going up to 400 miles on a charge, “which will allow you to drive from LA to San Francisco non-stop.” [Thanks, Weapon] [Image credit: AP Photo/Paul Sakuma] Confirmed: Our Gen III car, due out after Model X, will be named Model 3. http://t.co/PLhUzycSlp pic.twitter.com/noZf17LXre – Tesla Motors (@TeslaMotors) July 16, 2014 FYI, the Model 3 images used by @AutoExpress were mock-ups based on their own speculation. – Tesla Motors (@TeslaMotors) July 16, 2014 Filed under: Cellphones , Transportation Comments Source: AutoExpress 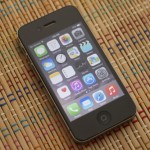