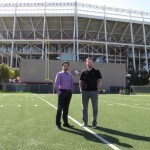 49ers CTO Kunal Malik (left) and Senior IT director Dan Williams (right) stand in front of Santa Clara Stadium. Jon Brodkin When the San Francisco 49ers’ new stadium opens for the 2014 NFL season, it is quite likely to have the best publicly accessible Wi-Fi network a sports facility in this country has ever known. The 49ers are defending NFC champions, so 68,500 fans will inevitably walk into the stadium for each game. And every single one of them will be able to connect to the wireless network, simultaneously , without any limits on uploads or downloads. Smartphones and tablets will run into the limits of their own hardware long before they hit the limits of the 49ers’ wireless network. A model of Santa Clara Stadium, with a wall painting visible in the background. Jon Brodkin Jon Brodkin Until now, stadium executives have said it’s pretty much impossible to build a network that lets every single fan connect at once. They’ve blamed this on limits in the amount of spectrum available to Wi-Fi, despite their big budgets and the extremely sophisticated networking equipment that largesse allows them to purchase. Even if you build the network perfectly, it would choke if every fan tried to get on at once—at least according to conventional wisdom. Read 69 remaining paragraphs | Comments

More here:
The 49ers’ plan to build the greatest stadium Wi-Fi network of all time 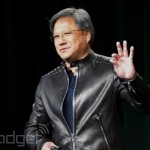 NVIDIA’s Tegra X1 is the first mobile chip with a teraflop...