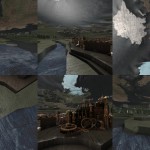 There are still ten days to go until Game of Thrones season six debuts, but HBO is doing its best to keep fans’ appetites for new footage satiated until then. After dropping a dingy new trailer on Monday, and some behind-the-scenes footage yesterday, it’s now released a 360-degree video of the show’s opening credits on Facebook. The extended sequence lets you explore the famous clockwork map of Westeros and Essos. The map is arranged inside a sphere, which means looking in the right direction will give you a little peek across the water at Sothoryos and the Basilisk Isles. Many of the show’s iconic locations are there, from King’s Landing and Winterfell to Dorne. There are more than a few easter eggs to discover just by looking around as well, including a glimpse of an unnamed direwolf by the wall — make of that what you will — and a PG-13 view of the Titan of Braavos. Via: Deadline Source: Game of Thrones (Facebook)

Read More:
The ‘Game of Thrones’ credits are more fun in 360-degrees