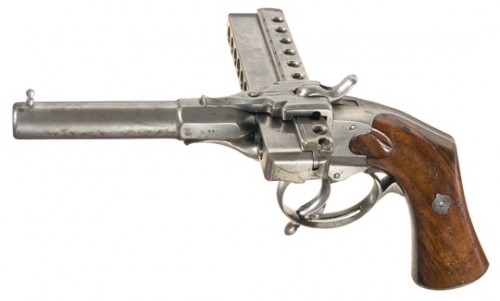 Here’s one early solution to the problem of limited magazine capacity. Between 1859 and 1862, a French inventor named Jarre patented several so-called harmonica pistols. As often as the user needed a fresh round, s/he could just push the magazine laterally. The pinfire example pictured above could hold nine 9mm cartridges.

Link via The Firearm Blog (which has pictures of other early high-capacity firearms) | Image: Rock Island Auction Company