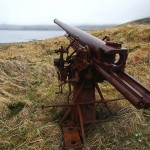 The Japanese military invaded American soil in 1942 when a force of 500 men overtook the Aleutian Islands of Attu and Kiska in Alaska. They captured a Navy weather crew stationed there and occupied the islands, which are the westernmost parts of the USA. It is now known as The Forgotten Battle but the invasion caused widespread outrage in 1942.  Pearl Harbor was still a fresh memory, having been attacked on December 7 of the previous year. Now, a Japanese military force had stepped foot on American soil – and the 500 had grown to over 5,000 men.  Although Kiska and neighboring Attu (which had been overrun two days previously) were part of the distant Aleutian Islands they were, nevertheless, American. Plans were immediately drawn up to retake the island, known as the Aleutian Campaign. The campaign would not succeed for over a year and would claim many American lives. Today, Kiska is a National Historic Landmark, and abandoned vehicles, weapons, and ordnance still litter the island. Signs warn of unexploded bombs and other hazards. Read about the Aleutian Campaign and see pictures of Kiska from both World War II and today at Kuriositas. Link -via the Presurfer (Image credit: Flickr user Buzz Hoffman )