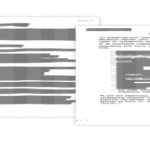 It took 11 years to finally unveil what the FBI demands in a National Security Letter. How it evolved over the years is shown above. (credit: ACLU ) The National Security Letter (NSL) is a potent surveillance tool that allows the government to acquire a wide swath of private information—all without a warrant. Federal investigators issue tens of thousands of them each year to banks, ISPs, car dealers, insurance companies, doctors, and you name it. The letters don’t need a judge’s signature and come with a gag to the recipient, forbidding the disclosure of the NSL to the public or the target. Nicholas Merrill (credit: Wikipedia ) For the first time, as part of a First Amendment lawsuit, a federal judge ordered the release of what the FBI was seeking from a small ISP as part of an NSL. Among other things, the FBI was demanding a target’s complete Web browsing history, IP addresses of everyone a person has corresponded with, and records of all online purchases, according to a court document unveiled Monday. All that’s required is an agent’s signature denoting that the information is relevant to an investigation. “The FBI has interpreted its NSL authority to encompass the websites we read, the Web searches we conduct, the people we contact, and the places we go. This kind of data reveals the most intimate details of our lives, including our political activities, religious affiliations, private relationships, and even our private thoughts and beliefs,” said Nicholas Merrill, who was president of Calyx Internet Access in New York when he received the NSL targeting one of his customers in 2004. Read 6 remaining paragraphs | Comments

Fewer People Are Dying of Cancer Than Ever Before