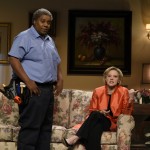 Honchos at NBC have told Ad Age that Saturday Night Live is going to show fewer commercials from next season. The 42nd year of the long-running sketch show will lose two whole ad breaks compared to the current season. That time will be handed back to producer Lorne Michaels to fill with the stated intention of making it “easier to watch the show live.” In exchange, the channel will let six companies pay to create “branded original content, ” that harnesses SNL’s cadre of writers and performers. We’re not sure how much paid-for programming will change the show’s slightly subversive tone , but as long as Kate McKinnon’s free to be Kate McKinnon, we’re not sure we care. It’s not explicitly addressed by either NBC Universal’s Linda Yaccarino or Lorne Michaels, but we’re fairly sure what’s causing the about-face. After all, cord-cutters and ad-averse millennials may prefer to watch the individual SNL sketches the morning after on YouTube. That way, they’re free from the burden of having to sit through an endless parade of commercials that break the mood of the comedy. The sort of young viewers that SNL is often designed for are increasingly used to watching shows without commercial breaks at all, thanks to Netflix and Amazon Prime. Hulu, even, offers smaller ad breaks than broadcast TV (and none when you upgrade to the premium tier). Ad Age says that around six-and-a-half-million people watch SNL during its traditional broadcast slot, er, live on Saturday nights. A further 2.2 million people subscribe to the show’s YouTube page, and even a lukewarm sketch like the Julia Louis-Dreyfuss cold open earned 1.4 million views. Clips that go viral , meanwhile, can get views an order of magnitude higher than that. Obviously, NBC and its advertising partners would like to get those eyeballs in front of their TV for the actual broadcast, and so it’s going to have to adapt to the modern era. Of course, some might say that nothing’s going to increase SNL’s audience unless it either: airs earlier or its creators work out a better ways to end a ske Source: Ad Age

35,000 vBulletin Sites Have Already Been Exploited By Week Old Hole