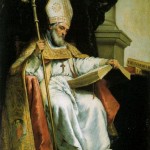 Pope John Paul II nominated Saint Isidore of Seville to be the patron saint of the internet, although the Vatican has not officially designated him so …yet. These things take time. Why St. Saint Isidore? Saint Isidore wrote a 20 book opus Etymologies, also known as the Origins, in which he tried to record everything that was known. Published after his death in 636, it was for a thousand years considered the encyclopedia of all human knowledge. Written in simple Latin, it was all a man needed in order to have access to everything he wanted to know about the world but never dared to ask, from the 28 types of common noun to the names of women’s outer garments. It was a tool by those seeking wisdom much like the internet is used now. There’s even a prayer asking St. Isidore for guidance while surfing the net. Link   -via mental_floss

Visit site:
The Patron Saint of the Internet