February 22, 2013, marks the 20th anniversary of the premiere of Babylon 5: The Gathering , the pilot film for what would eventually become the Babylon 5 television series. The show arguably changed the way narrative television works, and Babylon 5 creator J. Michael Straczynski also changed the rules for TV creators by actively engaging his fanbase online during the show’s production. More »

Read the article:
The Strange, Secret Evolution of Babylon 5 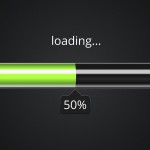 Where the Progress Bar Came From