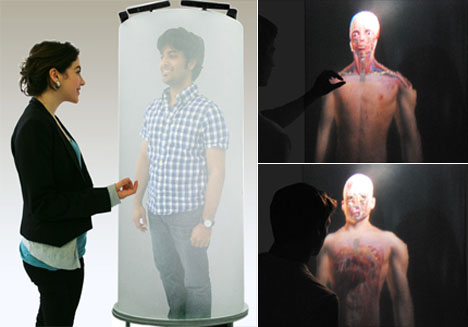 Led by professor Roel Vertegaal, a research team at the Human Media Lab of Canada’s Queen’s University has created a fascinating 360-degree display called the Telepod. It consists of a human-being-sized acrylic cylinder, six Microsoft Kinect sensors and a 3D projector, and as you’ll see in the video below, affords the viewer an experience similar to interacting with a hologram. The cylinder displays a live, three-dimensional image of the person with whom you’re interacting, and you can circumnavigate the cylinder to get a completely wraparound view.

The research team foresees at least two applications of the technology. The first, called TeleHuman, is basic teleconferencing. The second application, called BodiPod, could revolutionize the medical industry. It provides the viewer with a “peelable” X-ray scan of the subject’s body, meaning a patient on one continent could receive a diagnosis from a specialist on another (assuming the resolution was high enough). Have a look: