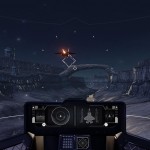 The US Air Force has an interesting dilemma: how do you convey the thrill of flying a fighter jet to potential recruits without taking them on a very expensive trip? Virtual reality, apparently. The military branch is teaming up with Reel FX on Air Force Performance Lab, a recruiting “experience” whose centerpiece is an Oculus Rift -based VR game that has you flying an F-35 through an obstacle course. It’s more of an arcade game than a simulator, but the use of real throttle-and-stick controls and a rumbling seat could make it feel convincing enough. There’s more tech in the lab beyond this, including a Kinect-based pull-up challenge, a cognitive test on a 42-inch touchscreen and an iPad-based career room. You’ll have to attend one of the Air Force’s recruiting stops (typically at air shows) to see any of this for yourself. Whether or not you can make it, it’s clear that the days of enlisting soldiers through brochures and videos are coming to an end. Filed under: Gaming , Wearables Comments

Original post:
The US Air Force hopes to recruit you with a virtual reality game

Floating 1,600dpi 3D projections made by pushing around flecks of cellulose...