There’s a fascinating linguistic fight brewing in Kazakhstan, due to the president’s decision to adopt a new alphabet for writing their language, Kazakh. The problem? It’s got too many apostrophes! For decades, Kazakhs have used the Cyrillic alphabet, which was imposed on them by the USSR back in the 30s. Now that Kazakhstan has started moving away from Russia — including making Kazakh more central in education and public life — the president decided he wanted to adopt a new alphabet, too. He wanted it based on the Latin one. But! Kazakh has many unique sounds that can’t be easily denoted using a Latin-style alphabet. Kazakhstan’s neighbors solved that problem by following the example of Turkey, where they use umlauts and phonetic symbols. But Kazkhstan’s president didn’t want that — and instead has pushed for the use of tons of apostrophes instead. Kazakhstan’s linguists intellectuals think this is nuts, as the New York Times reports: The Republic of Kazakhstan, for example, will be written in Kazakh as Qazaqstan Respy’bli’kasy. Others complained the use of apostrophes will make it impossible to do Google searches for many Kazakh words or to create hashtags on Twitter. “Nobody knows where he got this terrible idea from,” said Timur Kocaoglu, a professor of international relations and Turkish studies at Michigan State, who visited Kazakhstan last year. “Kazakh intellectuals are all laughing and asking: How can you read anything written like this?” The proposed script, he said, “makes your eyes hurt.” [snip] Under this new system, the Kazakh word for cherry will be written as s’i’i’e, and pronounced she-ee-ye. “When scholars first learned about this, we were all in shock,” Mr. Kazhybek said. What’s particularly interesting are the technological and geopolitical reasons behind the president’s embrace of apostrophes. He claims it’s about making the language easy to type on computers; no need to have a keyboard equipped with umlauts and other special characters. But critics say it’s about something else — the president’s desire to not alienate Russia, which doesn’t like the idea of the various former Soviet satellites adopting Turkic styles … The only reason publicly cited by Mr. Nazarbayev to explain why he did not want Turkish-style phonetic markers is that “there should not be any hooks or superfluous dots that cannot be put straight into a computer,” he said in September. He also complained that using digraphs to transcribe special Kazakh sounds would cause confusion when people try to read English, when the same combination of letters designates entirely different sounds. But others saw another possible motivation: Mr. Nazarbayev may be eager to avoid any suggestion that Kazakhstan is turning its back on Russia and embracing pan-Turkic unity, a bugbear for Russian officials in both czarist and Soviet times. Oh, and a director shot a video parodying the apostrophe-ridden words the president’s new language would produce . The image above is from it. It’s a great story , with fascinating nuance into Kazakhstan’s politics; go read it in full! A very good reminder of how deeply political language is, was, and probably always will be. (There’s a cool video embedded where you can learn Kazakh phrases , too.)

See the original post:
The war over apostrophes in Kazakhstan’s new alphabet 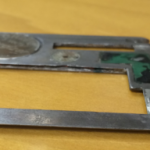 This New Card Skimmer Is Almost As Thin As A Credit...