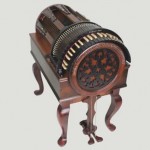 Currently up for $50,000 in funding on Kickstarter, the Wheelharp delivers the sounds of a chamber string orchestra via a keyboard and a full chromatic set of real strings. Oh, and it’s pretty much the most striking instrument we’ve ever seen. Developed by Los Angeles-based Antiquity Music, the device reacts to a user’s press of the keys by moving a corresponding string to a rotating wheel with an edge that bows the string. The instrument gives the player plenty of controls; the right pedal controls wheel speed, while the left mans the strings’ damper system. Though an early version was demoed at NAMM this year, the Wheelharp is currently in R&D mode, and Antiquity plans to put much of the Kickstarter money toward researching the optimal string selection. Hit up the source link to hear the instrument in action. Just don’t get too excited; the instrument will retail for a cool $12,500 — or a slightly more palatable $10,000 through the crowdfunding site. Filed under: Misc , Peripherals , Alt Comments Via: Laughing Squid Source: The Wheelharp (Kickstarter)

An Amazon Echo may be the key to solving a murder...