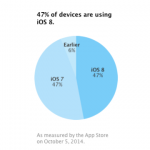 Apple If you follow Apple news closely, at some point in the last week you’ve probably seen the graph above. It’s from Apple’s Developer Support page, and the company calculates the figure by looking at the iOS versions of devices accessing the App Store. Like Google’s analogous developer dashboard for Android , it’s meant to give developers a broad look at OS usage so they can use that data to determine which OSes to support with their apps. The problem with the graph above isn’t that it shows iOS 8 and iOS 7 with the same amount of share, but that the number for iOS 8 has climbed just a single percentage point since the last measurement was taken on September 21 . Apple’s data mirrors what a number of other independent firms have been claiming virtually since launch day— Chitika’s data shows that iOS 8 had rolled out to 7.3 percent of the iOS userbase after 24 hours of availability, while iOS 7 had already hit 18.2 percent in the first 24 hours after its launch. More recent data from Fiksu shows an adoption curve closer to iOS 5 (the last version you needed iTunes to upgrade to) than to iOS 6 or iOS 7. Fiksu’s data shows iOS 8 with 40 percent of the iOS pie after 22 days, compared to nearly 60 percent for iOS 7 and iOS 6. Fiksu Though the Ars audience is generally more tech-savvy than the general populace, our own data shows that you guys are embracing iOS 8 less enthusiastically than you picked up iOS 7. Here’s data from iOS 7’s first two full weeks (running from September 22 of 2013 to October 5) compared to data from iOS 8’s first two full weeks (September 21 of 2014 to October 4). Around 70 percent of our site visits came from iOS 7 in that time period, compared to about 60 percent from iOS 8. Read 16 remaining paragraphs | Comments

Continue Reading:
There’s more than one reason why iOS 8’s growth has stalled

1860s photos of the last Samurai