When army ants stream into the jungles of Costa Rica, they leave death and destruction in their wake. These nomadic group predators eat everything from millipedes to other ants, and they even raid wasps’ nests for eggs and larvae. Any insect that doesn’t escape the swarming column of hundreds of thousands of ants is likely to die a terrible death. And yet many insects have evolved to live among army ants, feeding on their scraps and even taking shelter in their nests. Researchers Christoph von Beeren and Alexey K. Tishechkin just identified a tiny beetle they’ve named Nymphister kronaueri that keeps up with the army ants’ endless march in an unusual way. N. kronaueri clamps onto an army ant’s back with its mandibles, as if it were a soldier going into battle on the back of the most magnificent steed in the world. Von Beeren and Tishechkin describe the strange life of N. kronaueri in a paper for BMC Zoology , and they explain how these animals evolved to live among creatures who would normally gorge themselves upon their beetle guts. Insects and other creatures who live among ants are called myrmecophiles , which literally means ant lovers. Myrmecophiles stand to gain a lot from this strange relationship. Certainly they can feed off the colony’s leftovers in the wake of a raid, but there’s more to the relationship than that. Ants create a pleasant environment, much like a human city that attracts wild animals. The researchers write: Read 11 remaining paragraphs | Comments 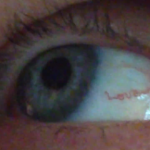 Woman has ‘love’ written with a blood vessel in her eye