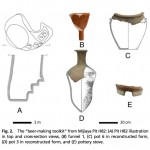 5,000 years ago on a terraced slope above the Chan River in Shaanxi Province, China, some enterprising villagers built two sophisticated beer stills. Part of the Mijiaya site, once the location of a thriving civilization, both stills were housed in pits sunk 2 to 3 meters into the ground, lined with rock, and accessed by stairs. One is fitted with a small shelf, and both have ceramic ovens for brewing in wide-mouthed pots that once held boiled barley. Archaeologists found other telltale beer-brewing tools (all covered in an ancient yellow residue), including funnels for filtration and amphorae, or cocoon-shaped containers, for fermentation. After careful analysis of plant and chemical remains on the inside of these storage containers, the scientists reported in Proceedings of the National Academy of Sciences  that they had a pretty good idea of what kinds of ingredients went into this ancient beer. Illustrations of the beer brewing pit and the 5,000-year-old components of the still discovered at the Mijiaya site in Shaanxi Province, China. (credit: Proceedings of the National Academy of Sciences) Most of these ingredients will sound familiar to beer lovers. The scientists found traces of broomcorn millet, barley, Triticeae (wheat), and Job’s tears (a grain plant often called Chinese pearl barley, though it is not actually barley), plus small amounts of snake gourd root and lily (both are tubers often used in Chinese medicine), as well as yam. It’s possible that the yam was added to enhance what was probably already a slightly sweet brew due to the barley. What impressed the archaeologists was that people living 5,000 years ago during the Neolithic Yangshao period had already mastered a pretty sophisticated system for brewing, including temperature regulation. This finding pre-dates by thousands of years the earliest writing about fermenting beer, which comes from Shang Dynasty manuscripts circa 1240-1046 BCE. In their article, the researchers write that all the evidence they examined indicates that “the Yangshao people brewed a mixed beer with specialized tools and knowledge of temperature control. Our data show that the Yangshao people developed a complicated fermentation method by malting and mashing different starchy plants.” This discovery may also shed light on a longstanding mystery about how barley came to Eastern China from Western Eurasia. By the time of the Han Dynasty, roughly 200 BCE, barley was already a popular crop. But what would have motivated early farmers to bring this grain all the way across the Central Plains? Apparently, it was for partying, not for eating. Write the archaeologists: Read 2 remaining paragraphs | Comments