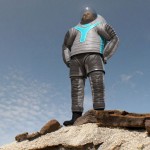 The follow-up to NASA’s rather Toy Story -esque Z-1 spacesuit was decided this week, thanks to an online poll . Three options were up for the task of being the next cover layer that will protect the Z-2, and after garnering 63 percent of the vote, the “Technology” option will be part of the agency’s new threads. An unadvertised underlying theme continues as renders of this suit certainly have a bit of a Tron aesthetic . Now, NASA engineers will move on to vacuum chamber, Neutral Buoyancy Lab, and rocky Martian surface tests which are all expected to commence this fall. There’s plenty of features that make this an improvement over previous models, so let’s take a closer look at the details. NASA says that the biggest improvement for Z-2 suit is its hard composite upper torso, which will offer the increased durability needed for Extravehicular Activity (EVA). Luminex wire and light-emitting patches allows for easy identification of crew members. For increased mobility, collapsing pleats allow the suit to fold, catering to an astronaut’s activity. There’s also exposed rotating bearings and abrasion resistant panels along the torso of the suit to further improve wear, protection and mobility. As mentioned, the testing phase — which includes buoyancy trials — is slated to begin this fall. One of Time Magazine’s Best Invention’s of 2012, the Z-1 suit was the first to use 3D scans for sizing, a suit-port with a hard upper torso structure and, at the time, the most resizable space wear that had be developed. [All images courtesy of NASA] Filed under: Science Comments Source: NASA

Turkish PM: “To Me, Social Media Is the Worst Menace To... 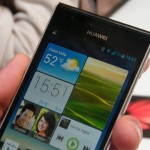 Huawei Claims It Has the World’s Fastest 4G Phone—But Who Really...