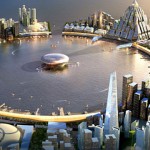 In an effort to boost its tourism industry, South Korea is considering a project that would see the construction of a $275 billion mega-city built on the islands of Yongyu-Muui in the port city of Incheon, next to Incheon International Airport. Called 8City, the attraction is expected to create 930,000 new jobs and attract 134 million tourists (mostly from China). But given the cost, it’s an open question as to whether it will ever get built. More »