GoPro’s variety of harnesses let you mount their cameras to your head, chest or even your dog. But a new company has developed a flying camera that you needn’t wear at all. You simply throw the Lily , as it’s called, into the air, where it takes flight and follows you on your adventures. Just over ten inches square, the aluminum and polycarbonate Lily is a dual-camera-equipped quadrotor drone with 20 minutes of flight time.  It hones in on a tracker you wear on your wrist, hovering anywhere from five to 50 feet above your head, and runs a tracking path of your choosing (i.e. follow shot, side shot, Michael-Bay encircling shot).  And it’ll keep up with you as long as you’re moving 25 miles per hour or less. It seems pretty unbelievable: The Lily is expected to retail for $999, but the developers are currently selling pre-orders for just $499. I keep thinking of the applications it could have beyond adventure videography. Given a longer flight time and a workable way to navigate overhead obstacles, a fly-‘n-follow camera could be useful for everything from tracking animals on a farm to less confrontational police pursuits. We’ll have to see how well the device actually works when it begins shipping in February of next year.

More:
This "Throw and Shoot" Camera is Like a Flying GoPro That Follows You 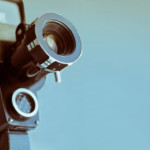