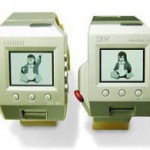 Welcome to Time Machines , where we offer up a selection of mechanical oddities, milestone gadgets and unique inventions to test out your tech-history skills. In the week’s leading up to the biggest gadget show on Earth, we’ll be offering a special look at relics from CES’ past. Smart devices have infiltrated our outfits in many ways, but one in particular has been a staple of our ensembles for centuries. From pockets to wrists, its accessibility has also tempted inventors to add camera optics, dating as far back as the 1800s. Although we’ve refined these devices for years, advancements beyond timekeeping tend to come and go. Head past the break for more of the story. CASIO WQV-1 WRIST CAMERA There’s been a great deal of traction in the tech-enabled timepiece market lately, from the crowdfunded success of Pebble to the recent launch of Samsung’s Galaxy Gear . Not only can the latter connect wirelessly to select Samsung smartphones, but it can also take photos. And with snapshots becoming one of the main currencies in social media, camera-studded smart devices are on the rise. Thirteen years ago, Casio lead an early wave of wrist-worn camera tech with its launch of the WQV-1 Wrist Camera at the 2000 Winter Consumer Electronics Show (CES) in Las Vegas, but it wasn’t the first to consider such a hybrid. UK optics and photography company J. Lancaster & Son patented a telescoping camera that fit into a pocket watch-styled casing back in 1886. Although to fit the photo gear inside, they had to ditch the timekeeping tech entirely. It may have been good for secret selfies and clandestine snapshots, but not much else. Spin the clock ahead nearly a century to the 1970s and watches with LED displays like the Hamilton Pulsar P1 and Sinclair Black Watch began to pop up on the market. They had a futuristic look and backlit watch faces, but often suffered from poor battery life. During that same decade, the liquid crystal display (LCD) was also developed. It appeared in watches like the 1974 Casiotron, and converted electrical signals into illuminated digits that could display both time and date, and were typically more reliable in build quality than LEDs. By the time the ’80s rolled around, watches were getting significantly smarter with the addition of calculator functionality, but it wasn’t long before watches like the 1984 Seiko UC-2000 and its UC-2200 keyboard peripheral allowed users to do actual computing. By 1999, Samsung seemed to find inspiration in the tech-laden detective comic Dick Tracy and introduced its SPH-WP10, a CDMA-based watch that offered wireless phone functionality in a wrist-worn form factor. When Casio released its WQV-1 Wrist Camera, it stepped up the gimmick game. It even hedged its bets and launched more than one unique watch at CES that year. Alongside the Wrist Camera, it also showed off its MP3 watch called the WMP-1V, which had a headphone jack so users could get their groove on and tell the time. The WQV-1 Wrist Camera captured snapshots through a lens located just above the timepiece (facing away from the wearer). Images were perhaps best viewed on its 120 x 120 display due to the low image resolution (around 0.03 megapixel). Photos could be taken using three modes: Normal, a 16-shade grayscale monochrome; Art, two-tone only; and Merge, which combined two photos into a single shot. The photos could be exported as BMP or JPEG files, but you’d need a PC running Windows, as well as Casio’s proprietary infrared adapter and Link software. If you had a friend with a Wrist Camera, you could also beam photos directly to their watch. The 1MB of built-in storage could only hold about 100 images, but the monochromatic output and limited resolution likely didn’t provide many “keepers.” Although the technology was still young, it was an iterative step forward in consumer wearables and as the years passed, other watch-based devices popped up — with varied results. Around the same time as the WQV-1 launch, IBM teamed up with Citizen and Tokyo Research Lab to work on its Linux-based WatchPad 1.5 , exploring the possibilities of high-functioning, wrist-worn computers, but it failed to go beyond the prototype phase. In 2004, Microsoft’s Smart Personal Objects Technology (SPOT) started arriving on watches to deliver MSN Direct services over FM airwaves, only to be discontinued in 2008 (followed by the MSN Direct service itself in 2012). The camera didn’t make a splash in the market again until this year, when Samsung launched the Galaxy Gear smartwatch. It’s an ambitious device, aiming to outdo the relatively simplistic functions of the popular Pebble by adding a full-color touchscreen and a 1.9-megapixel camera. Although watches have bigger brains than ever, the ones that have made it to market often fail to gain enduring success and many seem to rely heavily on companion devices for any significant functionality. If wrist-worn form factors continue to come up short in the camera department, snapshot addicts may have to look elsewhere for photographic convenience. Filed under: Science , Alt Comments