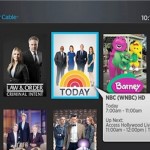 What was promised has been delivered to Xbox-owning Time Warner Cable customers. Today, TWC TV for Xbox 360 is finally available to Xbox Live Gold members, and brings live streaming of up to 300 channels to the console. Once downloaded, folks can find their favorite shows using the app’s program guide and Kinect gesture and voice controls. For now, the service is only streaming live programming, but Polygon reports that Microsoft’s working to add VOD content to the app as well — with no timetable for its arrival, naturally. Still, with the rollout of its latest live TV streaming app, TWC TV is now on iOS, Android, PC, Roku and Samsung Smart TVs . It’s clear that the company’s made spreading the TWC TV love a priority, so let’s hope it starts showing the same initiative when it comes to those negotiations with CBS . Football season’s only a couple weeks away, so the clock is ticking, TWC. Comments Via: TechCrunch