Facebook said today that it has increased the maximum character count in status updates to over 60,000. This is 12 times the original character count of 5,000. The change was originally spotted by All Facebook on a post on the Facebook+Journalists Page.

The longer status updates appear in the Live Ticker the same as any other status update truncated after a certain character limit is reached (which looks to be about 80), but it truncates in News Feed after 400 characters. As TechCrunch’s Josh Constine points out in our own experimentation with the new character limit, Facebook prompts users to create a Note if the character limit exceeds 63,206: 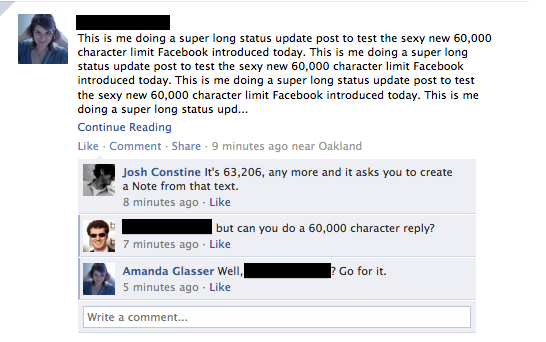 Longer status updates help differentiate the feature from Tweets and potentially create space for new content types from users. For example, in the announcement post Facebook suggests that a user could share a novel on Facebook in nine status update posts using the new character limit. Users that practice collaborative writing, say for a college essay writing course or something, could now use Facebook as writing workshop space.

A more interesting questions is whether or not post length will factor into the GraphRank algorithm that determines post placement in the News Feed. While the character cut off in News Feed will prevent long form posts from pushing other News Feed stories farther down the page, it could be that users are attracted to longer posts that seem to have something important to say.