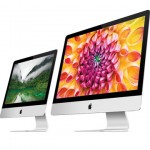 Tim Cook to Announce Mac Production Is Coming to the US...