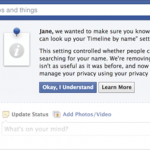 Facebook to rip search opt-out from under those who were using...